delete_forever
This server has been deleted from the list and is available only for archival purposes.
chevron_left Back to List

Attack of the B-Team 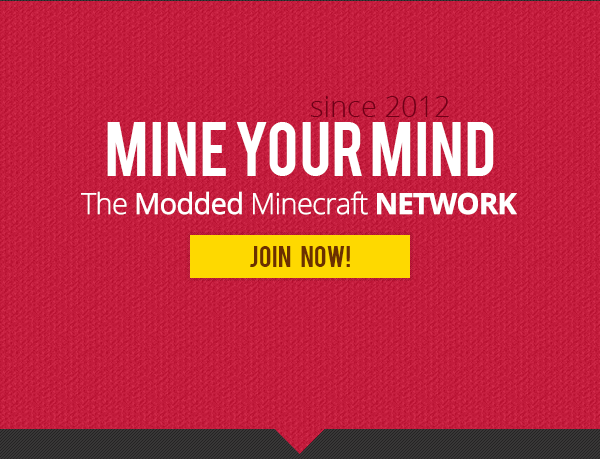 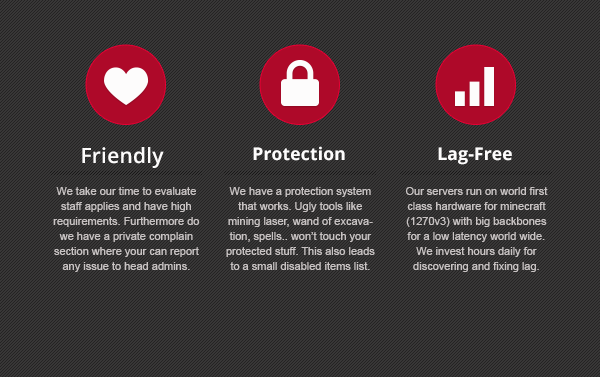 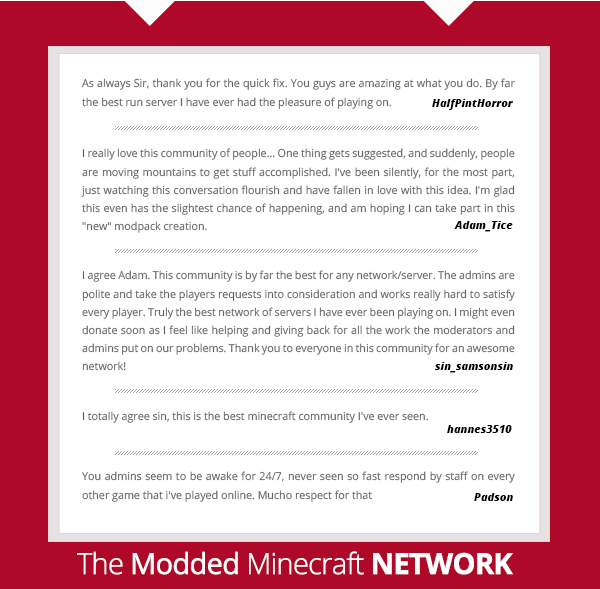 sentiment_very_dissatisfied
the admin called me the n word when i asked what the tps was (if i were to guess, about less then 1)
Posted 11th Feb 2020

sentiment_very_satisfied
I really like the server and it has a nice ranking system. Everyone on it is really kind and they are quick to stop lag machines.
Posted 18th Jan 2020

sentiment_very_satisfied
It's been a quite a while since I've played on a MyM server but reading the other reviews I was shocked. I saw tons of bad reviews claiming that the staff were rude, etc; I strongly disagree. I used to play on the B-team server and at the time it was the best server I had ever played on. The staff would always help me when I needed help and the community was also very nice. I honestly miss those days and wish I could go back. Mine Your Mind will always hold a place in my heart because of the fun it brought me!
Posted 13th Mar 2019

sentiment_very_dissatisfied
One of THE laggiest servers I had ever been on. Constant mini-stalls every 10 seconds, and nearly no staff to speak of. When my house was griefed with a claim bypass I couldn't get any help at all. Moved on to a better network and never looked back. Doing this review because somehow I forgot to do it before.
Posted 22nd Oct 2017

sentiment_very_dissatisfied
Racist server!!!!
Only for the elite.
Posted 3rd Oct 2017

sentiment_dissatisfied
Quite Laggy and when looking on the Website couldn't find any banned item lists. Silly things are banned and blamed for LAG. I only found this out from a forum post by an individual, not on the /banneditems list. very spammy chat (vote, register, lag caused by which ME system like it's an award).
Posted 28th Aug 2017

sentiment_very_dissatisfied
Worst server i've ever played on , very laggy and there are servers up with less than 5 players , and those servers are laggy as well , do not join i warn you , all these good reviews are fake.
Posted 14th Aug 2017

sentiment_very_dissatisfied
I haven't been able to log onto crash landing for a few months do to "Failed to login: Bad login" Yes I own minecraft however I can ensure to everyone that it is on the servers end because I have done everything to fix it but I can't
Posted 21st Jul 2017

sentiment_very_satisfied
The server and community are very friendly, and the staff are wonderful!
Posted 21st Jul 2017

sentiment_satisfied
This server was good, it was simply to use, i like this :D
Posted 20th Jun 2017

sentiment_neutral
Hey, I did a vote for your B-Team server, and I did the double vote by sharing on G+ but didn't get double rewards.
Posted 9th Jun 2017

sentiment_very_dissatisfied
The staff are absolutely laughable, at least from my experience on FTB beyond. Where I laughed at by a moderator for being gay; after I admitted so and said I did not mind someone using the word in vein. Then proceeded to get targeted there onwards for trivial things such as thicc and autism; with no context that is harmful to any one of any age.

Worst most disrespectful staff encounter I've had in years; rude. Wolfey moderator @ FTB Beyond
The server replied:
Hi,
this sounds bad and is definitely not welcome. Any staff behaving in a way like this would be directly fired if not banned once we are aware of it. I checked the chat logs of the server and couldn't find anything regarding this. We also do not have any staff by the name of Wolfey. Are you sure this was the server you were on? If so please provide more detail (time stamp, the staffs name and if you have screenshots): https://mineyourmind.net/forum/forums/complaints-against-players-and-staff.186/
Posted 15th May 2017

sentiment_very_satisfied
great server, no lag
try it out
Posted 13th May 2017

sentiment_very_dissatisfied
There is a lot of lag, no one is doing anything about it and the staff are horrible.
Posted 1st May 2017

sentiment_very_satisfied
I just want to see other rewiews, and i dont know how : D
Posted 18th Apr 2017

TPS lag all the time.

This server should not be at the top of the list that's for sure.
Posted 12th Mar 2017

sentiment_satisfied
I give this server a semi good rating due to issues I think need improvement.

First I would like to say the server is ran very well in terms of performance which is why I believe the network runs successfully. The owners also spend a lot of time squashing bugs and improving the community and knowledge base.

Overall the staff are helpful and mature at most times.

Tickets are resolved in a quick manner for important matters.

Zero Tolerance of any type of theft or griefing on any of the servers.

Large array of servers and Mods, and always up to date with brand new mod packs.

Ranks that can be purchased work for all servers and mods globally.

But the server really lacks with overall in the staff management choices being made. A lot of the staff (Not all) are very passive aggressive something that's of no surprise for any Minecraft server. The words they say and the choices they make are in personal preference and choices, they don't care much about the choices or opinion of the players that make up the server. When a player suggests something they huddle up as a group and attack the players opinion, but like I said this is typical behavior for Minecraft where people side with their own so this isn't something anyone should be alarmed or worried about. (Don't believe me take a look over at the forums you will plenty of this activity.)

If you lose items you paid for due to server issues you can expect not to receive them back in most cases, there is a lot of gray area in their terms and conditions with their server. When you do try to request any assistance expect major resistance for resolve. They will repeatedly tell you their return policy till blue in their face leaving no room for negotiation regardless of the situation.

The servers obsession with end game items on the market is out of control, they hold a very strict grip on the market and what can be put on it. If you get caught selling items that are considered end game (The list if full of stupidity in my opinion) they will possibly ban you for a period of time after inital warning. Mid game MYM's will have less value to a player because of this. Don't ever suggest that an item is not end game or you'll have the complete staff team jumping on you like linebackers.

The server has 4 types of currency Tickets, Tokens, Credits and MYM's. All which are a mind cluster to get use to when your a new player. System should have Credits and MYM's and do away with the Tickets and tokens to save confusion.

Support Ticket system is another mind cluster that needs to be more simplified as a lot of people can't figure it out without spending 20-30 mins trying to link their accounts and other obstacles to create a ticket as a new player.

Further more I believe the server just overall complicates things that really don't need to be complicated such as the things previously mentioned. What seems easy to one person may not seem easy for another sadly they really don't take this into consideration with some of the choices they make.

Overall don't make suggestions, it's a waste of time, they want what they want regardless of what you suggest.
The server replied:
Thank you very much for the honest review.

Since this time we strictly stick with it. While I understand that it comes across harsh when requests for item refunds are denied in a quick fashion and end game items removed from the market. But it is also important to keep in mind what would happen if this wouldn't be the case, if we would discuss every situation in length. The confusion this would cause and the missing clarity.. Just something to keep in mind.

Overall you make a good point, MyM has always been known to be very strict, expecting players to really play alongside the rules, have a mature appearance and to show own initiative. Some might like it while others can't bear it. This is really something to keep in mind when looking a for server to spend a lot of time on.

Regarding suggestions, it is true, most of them are quickly decided against after consideration. The main issue is that we are running a big amount of servers and have done so for years. Like with every company and human being, when you get old and found a good way of dealing with things, change is slow. A cruise can't turn at the rate of jet-ski, nor can the engine be swapped in a timely fashion and if it is, there are 50 engineers that need to be trained instead of 1 (the jet-ski owner) and failures affect thousands of people on the ship.
Complexity and size are the death of change, especially if the current system is solid and working.

Ever tried to convince someone to do something differently while the old method of doing it was solid, working and mastered through experience. Unless the new method is 10 times better/faster, good luck ;)
Posted 27th Feb 2017

sentiment_very_satisfied
This server is great for people of all ages, it has many servers ranging from infinity to direwolf20 and I guess the best part about it is the community!
Posted 3rd Feb 2017

sentiment_very_satisfied
This is by far the best network i've ever been on, the mod packs are amazing, and they arent afraid to try experimental packs. Then the admins spend literally DAYS working to make sure any problems with them are resolved. I've never seen a staff so committed to making the player experience as great as possible. I've got 2+ years on the network and not a moment regretted.
Posted 10th Jan 2017

sentiment_very_satisfied
Honestly a great server, I have never seen staff that put in so much work and developers/admins that sometimes even make their own modpacks that are truely amazing. There is so many ways to get help, they have a teamspeak server and everything. And if the servers do go down, it is due to a mod issue plus the owner correctly handles supply and demand. The community is so amazing, with everyone being friendly and easy to talk to. I have met one of my good friends on this network, and many more are easy to find.
Posted 10th Jan 2017